How to hide files in Android

How to make files invisible in your phone

How to hide photos in Android

Users of many modern portable devices sometimes wonder: how to hide files on a smartphone or tablet running the Android operating system? How to make sure that their presence could not be detected by an outsider, and the system stopped scanning regularly.

Some of you, for example, may have noticed that when transferring files hidden in Windows to Android, the latter shows them as if nothing had happened! Do you have any personal photos or recordings that you have made invisible? And you thought that this would happen? But they found that the most popular mobile platform "saw" them.

The thing is that for Unix operating systems (and Android is a kind of such a system), the known methods of hiding files do not work. There are its own: one of the universal for many such systems is to use the dot symbol. The dot seems to signal the Unix system: this is closed.

How to use this symbol?

It's very simple: if, say, rename a file word.doc in .word.doc , then Android, in theory, will stop showing it. Similarly, we hide the file foto.jpg : by renaming it .foto.jpg. Etc. This feature can also be used for folders and directories. If you create a .invisible file in the directory you want to hide, then when you see the dot, the system should "understand" you.

There are also many application possibilities to dig files in an Android device. You can find a special application and download it. Next, run, check the boxes next to the necessary files and voila! It's even faster than renaming files separately.

If you want, on the contrary, to see your hidden files, you need to go to the file manager, which is called Es Commande. Next, go to the Menu, select the Settings tab>Displays: there should be an option to "Show hidden files". We put a tick here. 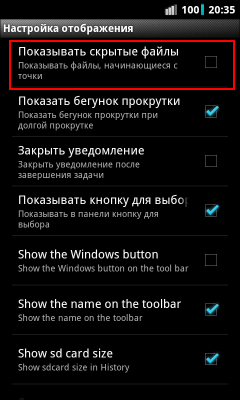