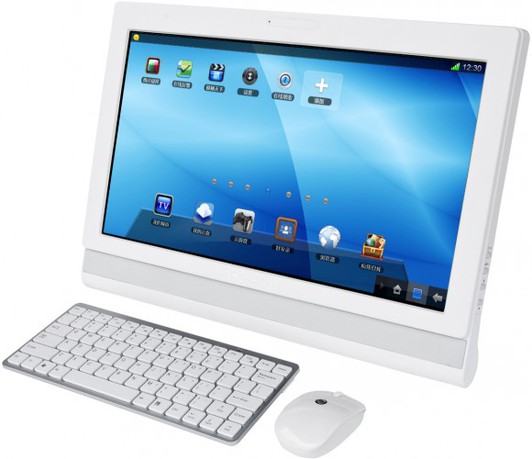 After the failure in the world of cell phones, Motorola decided to switch to a computer. As a result, the HMC3260 personal computer was born. It was developed jointly with the Chinese company WASU Digital Group.

The computer was presented at the official presentation as a "cloud" computer. The promo video was also devoted to the same topic. A light, airy computer floating on a cloud - what could be more tempting? This choice is conditioned by cooperation. WASU wanted to create the world's first computer that could provide a wide range of entertainment based on cloud technologies.

It is worth noting that the HMC3260 was very popular on the official presentation and this is not surprising. Firstly, this PC is a touchscreen monoblock, secondly, it runs a modern Android mobile operating system, and thirdly, it is possible to connect a network cable to it, as well as connect a TV antenna.

The computer is painted in white (in accordance with the image of the cloud), a white mouse and a fairly comfortable white keyboard are included. To date, the PC has already been put into production, the first sales have already started.

Whether the novelty will be popular is unknown. Motorola together with WASU created a computer mainly for those who actively use cloud technologies. Perhaps the release of a computer will be able to increase the number of users of this data storage technology, but it is unlikely that it will be able to dramatically change the situation.

There is no data on the prices of the new product, as well as information about whether this PC will be officially delivered to Russia, at the moment the monoblock is distributed mainly in China, where it is produced.