Overview of the Baseus 3 in 1 Wireless Charger 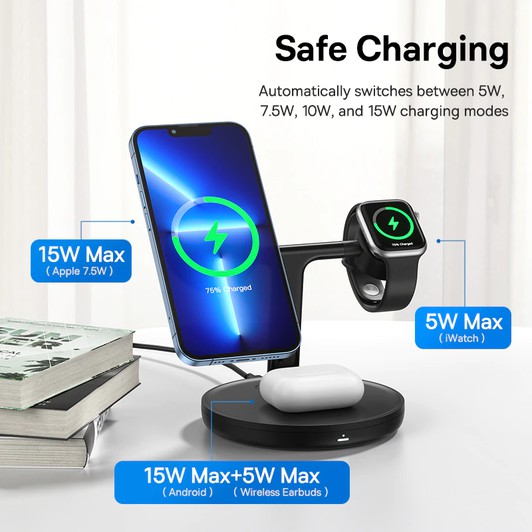 In the modern world, everyone has several gadgets: a smartphone, wireless headphones, a wireless watch. And, of course, all these devices require charging. And often they are discharged at the same time, and this forces us to purchase a separate charger for each gadget. As a result, we have a bunch of wires that are constantly confused.

Moreover, the charging plugs are constantly broken, lost, you have to spend money on new cables, and more offensively, the input ports in the devices themselves are also broken.

Now it won't be a problem anymore. The new magnetic wireless device from Baseus, powered by QI technology, has become one of the most convenient inventions of recent years. With it, you will forget about wires and charging problems.

Baseus is a modern Asian company formed most recently in 2010. Despite this, the brand has already conquered a huge part of the global market of accessories for mobile phones. This is due to the high quality of the products, affordable prices, high ergonomics and a diverse modern assortment. And the fact that the company's policy is based on the desires and needs of customers. The company constantly monitors the market and creates its new products, satisfying specific requests and solving specific consumer problems.

The new Baseus 3 in 1 device is compatible with all Apple gadgets and is designed to simultaneously charge three devices at once: Iphone, Airpods and Apple Watch. Or you can also use it to charge two smartphones by placing one on the headphone platform. The only condition is that the phone must support the wireless charging function. And the gadget that you plan to attach to the magnetic stand of the charger must also have either a built-in magnetic ring or a special case with a magnetic ring.

The new wireless charging is equipped with a special chip that allows you to adjust the voltage to the needs of a particular device. This is a very useful feature that significantly extends the life of batteries.

The device is made in a minimalistic design and thanks to its winning black color will perfectly fit into the interior of your workspace. Its body is made of fairly durable plastic. The model is also equipped with silicone legs that prevent slipping.

The charging size is quite compact, despite its functionality. The parameters are: 200 by 95 by 12 mm. The weight of the device is only 170 grams.

Baseus has paid great attention to the security of its device. All the materials used in the production are, firstly, the most modern, and, secondly, they are resistant to both current and high temperatures. Special conduction coils are responsible for efficient current removal without overheating during charging. In addition, two power chips dissipate heat.

The model is also equipped with a special controller that protects against short circuits, overheating and overvoltage.

Sixteen large magnets will securely lock your gadget and provide fast and stable charging. And a silicone anti-slip pad will protect the phone from falling. It also blocks heat transfer.

The model is equipped with a USB Type-C connector, the output power of which is 18 watts. This is enough to quickly charge all connected devices even when charging at the same time. For the convenience of the user, there is a built-in operation indicator light.

Also, you can always adjust the wireless charging for yourself so that you can watch videos or play and charge your smartphone at the same time. The device has an angle adjustment. The permissible angle of inclination of the device is up to 20 degrees. You can charge both horizontally and vertically.

The device comes in a small white branded box. Included with the device you will also receive a USB-C USB cable, a user manual in twelve languages and a warranty card. The length of the wire is one meter. There is a special compartment at the base of the stand where you can store it.